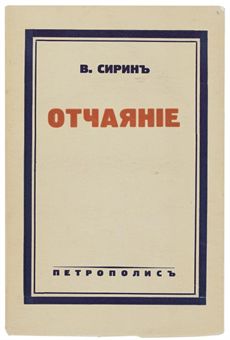 I tend to have problems with Nabokov books.

I mean the actual, physical books.

Years ago, I bought a copy of Bend Sinister and never got a chance to read the damned thing because this particular edition was bound by a barely flexible plastic cover. When I tried to open the novel more than 90°, the front cover, which I’ll remind you is traditionally found on the left side of books in the English-speaking world, broke.

Due to the nature of the material, it did not tear, but actually broke. I could have stabbed myself with the resulting shrapnel. Since the half of the cover that remained was still fairly inflexible and now also dangerous, I for one of the rare times in my life actually threw a book in the garbage.

This past weekend, I bought a copy of Despair from a used bookstore. This wasn’t a weird, built-to-survive-being-smuggled-into-a-dystopian-society font of forbidden knowledge meant to double as a weapon of revolution. It was the type of Nabokov paperback you see everywhere these days, the Vintage International kind with the John Updike quote on the back. It appeared to be in “like new” condition and the price reflected that.

When I had gotten it home, no sooner had I turned the first page of the second chapter than the first chapter made a cracking sound and fell out. As I continued to read, sections of pages kept flaking away from the spine, almost as if the book were consciously letting itself go.

The only reason why I mention these episodes is because they’re exactly the kind of colorful, quasi-supernatural details that would inhabit a Nabokov story. So clearly, I can’t blame the publishers. I can only blame myself or possibly the author, because the only explanation that really makes sense is that I am a Nabokov character, a terrifying prospect from almost any angle. But I am determined to make the best of whatever fate awaits me in this elaborately idiosyncratic and tragic universe that may soon become reality for everyone if we can’t stop Trump from winning the election.

For the Nabokovian universe is also a magical place, not subject to the normal laws of human limitation, and Despair is no exception.

Having discussed The Talented Mr. Ripley on this blog recently, I found it interesting to see the number of parallels existing between Highsmith’s masterpiece and this early-ish effort of Nabokov’s. Both of them involve a poor man as well as one who is, if not wealthy, at least passively part of a higher class, a case of falsified identity, a criminal act intended to secure gains for one of the men, a highly oblivious female and an international flight and pursuit.

Most, if not all, of these elements were nothing new at the time either book was written, and they weren’t the only platforms on which Nabokov or Highsmith played with them. However, because they were each put together with a peculiarly amoral sensibility, they at times seem to mirror each other eerily, just as Nabokov’s “hero” Hermann and his lookalike Felix, a man who Hermann almost literally stumbles across while in Prague on business.

This chance meeting with Felix, who by Hermann’s own reckoning more or less looks exactly like him, begins to eat at him from the moment he realizes that Felix doesn’t see the resemblance as strongly or significantly he does. This calls Hermann’s sanity into question both for the fact that he insists on a resemblance that no one else is around to verify, and that he becomes more and more obsessed with this resemblance over time.

When he finally hatches a criminal plot that takes advantage of the fact, it seems that he’s more interested in his own performance and whether or not he can pull it off than in any potential financial gain.

If The Talented Mr. Ripley was successful partially because it dared to create a convincing amoral study in a way that Dostoyevsky didn’t manage with Crime and Punishment—and that makes Camus’ criminal Meursault in The Stranger look like more of an interesting preliminary sketch than a full character—Despair goes a step further and barely even bothers with confronting the idea of morality.

Tom Ripley at least occasionally waxes philosophical on human society and makes his internal struggles, practical and selfish as they may be, relatable and understandable to the reader’s mind. Hermann doesn’t bother. The book is presumably being written by him as, holed up in a hotel, he reflects on the events of the premeditated criminal act he committed and is determined the world should know about, even if he at times doubts his own cleverness and originality.

He zooms in on certain details that are of the utmost importance to him, but omits other parts of his story with impatience, all the while insisting on the strength of his own literary abilities and even mocking the usual narrative styles and tricks of authors. At least in presentation, he’s much more of a head case than Tom Ripley, which makes it easier to view him as a separate entity from humanity at times, and makes the story more humorous and particular in nature.

In the course of his writing, Hermann occasionally directly addresses the reader as being a certain Russian émigré author, presumably Nabokov, who he hopes can somehow manage to have his book published in the U.S.S.R., even if he steals it and has it published under his own name. German with a Russian background himself, and touchy and vain about his writing, Hermann fancies his story untranslatable from Russian and so seeks to have it published in the language even though he knows his options for doing so in Soviet times are severely limited.

This adds another layer to the identity intrigue, and the real kicker is that Despair was published first by a Russian émigré press in Berlin, and then in 1965 not only translated by Nabokov himself but revised for the edition now available to us in the English-speaking world.

Also, there was an earlier English translation made available by a London publisher in 1937, but Nabokov claimed that nearly the whole stock was wiped out by a German bomb. Perhaps this is the cosmic reason why, many decades later, his sturdily-bound books keep practically exploding in my hands. (It may be worth noting that the books that have fallen apart on me have been English versions of novels first written in Russian, though I have a much older and more flimsy-looking paperback copy of Lolita that has held up just fine for years.)

Considering all this, it’s highly unlikely that the author of The Talented Mr. Ripley ever got her hands on a copy of Despair, though this would have paired nicely with the rumor that Nabokov was influenced by Highsmith’s The Price of Salt when he wrote the cross-country driving scenes in Lolita. Maybe this is just an instance of two authors with disparate literary styles who nevertheless shared some literary territory: criminal psychology, expatriatism and the idea that absolutely nothing should be learned from their books, for instance.

The way in which I find Despair most interesting as a companion piece to The Talented Mr. Ripley, though it certainly does not have to be read that way, is in how it delves into the idea of originality (sometimes equated with superiority) vs. mediocrity. This is something brought up in Highsmith’s novel from time to time, as Tom Ripley fancies himself to have certain superior sensibilities that can be fleshed out into a complete lifestyle with the addition of money, but at the same time is aware that he doesn’t have any real talent for painting or any single thing that matters in itself—he even at times seems aware of the fact that he tends to prey on people who he considers “better” than him.

Hermann is also obsessed with his own sensibilities, and values the idea of being a good performer above that of being a genuine human being. He lies compulsively to his wife, who is so forgetful that he doesn’t have to worry about remembering his lies, but this isn’t enough to satisfy his appetite for creation—and he doesn’t have the taste or the patience to savor the subtlety of his own antics. He’s a helpless criminal mind on a string, who vehemently does not believe in God but is visibly controlled by other forces, if only his own neuroses and godlike ambitions.

Like Ripley, he suspects himself of mediocrity, but this fear only makes him more determined to carry out his potentially mediocre plan. In this way, both stories present the fact of striving for superiority and originality, in art as well as in life, being a biological animal impulse that nevertheless must be dressed up in more sophisticated clothing in order to be successful. Working in a largely amoral context in which the actions of the protagonists are not applauded or condemned, the stories begin to explore the idea of how hunger for a higher form of significance can lead to extreme behavior. And in both cases it’s significance that seems to ultimately be sought—the idea of not dying without at least trying to become something more than oneself is crucial.

In Despair, however, this anxiety and desperation is most apparent. It affects how Hermann writes his story, the events he chooses to examine ruthlessly and the details he overlooks. It’s almost as if by committing an act that obliterates himself as well as another, he’s trying to connect with a larger picture in the only way he knows how. This results in a strange, funny and fragmented ride. And then, like with that famous anthropomorphic egg, we have to try to put all the pieces back together again—even if, in the end, this is impossible.

One thought on “Nabokov’s Exploding Book: The Criminal Romp “Despair””