Recently, I had a dream that I believe was brought on, at least in part, by the recent English-language release of the novel Voroshilovgrad by Ukrainian lit superstar Serhiy Zhadan, translated by Riley-Costigan Humes and Isaac Wheeler for Deep Vellum Publishing.

In this dream, I was working at a job I had years ago, only it wasn’t years ago, it was now.

The job was something dull and administrative; a job I’d had for years. My coworkers at this job, however, were not all my co-workers from that time—they were instead various people who I’ve met at jobs over the years (all “day jobs”), none of them anyone with whom I’d had a close friendship or even seen outside of work much. In fact, the group of people who I hung out with regularly at this job in real life seemed to be specifically banned from my dreamworld.

Instead, these were all people who I (however fleetingly) had wanted to get to know better: Those who seemed intriguing, brief or prolonged crushes, people for whom I’d felt some kind of affinity but was shy around or just had limited contact with due to constraints of the job. In other words, those who I might have known but never did. Some of them were even people who I’d been annoyed by, because of traits the invariably boring work we had to do brought out in them, but who I’d also kind of liked and thought I could get along with in a different context.

There was something about the time and space of the dream that seemed like eternity. Not only was I still “working” with all these people (and they with each other, as if we had all been doing so together for years), but we had all, without quitting our jobs, moved on to brighter and more satisfying futures. We would often disappear from work for long periods of time to engage in current pursuits.

Every once in a while, someone would say something like “Well, for the next two weeks, I’m going to be playing the part of Griselda in the Broadway Street Theater’s production of ‘Cinderella,'” and sigh in such a way that implied anyone within earshot would understand both the good and anxiety-provoking elements of this fate. We were all still together and routinely in each other’s company, yet free from job stresses and deadlines, free to come and go as we pleased.

In the weeks and months that seemed to pass within my dream, I stopped feeling anxious about any of these people ever disappearing from my life again. I was getting to know them better and better, if only little by little, and the slowness of our growing friendships didn’t matter because I would always see them again. In fact, the need to get to know anyone really well was diminished by the fact that I knew that mathematically, scientifically, we would have to eventually become close.

This place in my dream was like a version of Facebook in which you could exist without having to say anything to remind your friends you were there, where despite the fact that we occasionally spoke, the point was just to be alive in each other’s presence. And as much as a dreamworld is “supposed” to be anything, I think it was supposed to be heaven. But it was a curiously non-sentimental heaven, a kind of obvious and easygoing happiness that only promised itself.

Minutes after waking, I had the idea that this dream was in part inspired by Voroshilovgrad, by the idea of a particular kind of eternity and ongoing kinship—love, even—that I’d glimpsed in its story.

In the beginning of the novel, Herman, the protagonist, steps out on his job and bland urban life after receiving a mysterious phone call from a pal of his older brother living in their hometown out in the sticks. The message? His brother has vanished, there’s an implication that something bad has gone down, and Herman hightails it out there to see what’s going on.

Once “home,” he falls in with the local populace, gets to know his brother’s co-working pals and his accountant, Olga, and finds himself left with managing his brother’s business, a gas station, which is already legally in his name.

Despite the fact that most of it takes place in and around the same gas station, Voroshilovgrad has the distinct feeling of a road or adventure novel. Little by little, the landscape and the people who populate it reveal themselves to Herman. But while there is some actual movement in the story, some walking and train travel and driving, the main character himself doesn’t seem to move around so much as get caught up in circumstances. 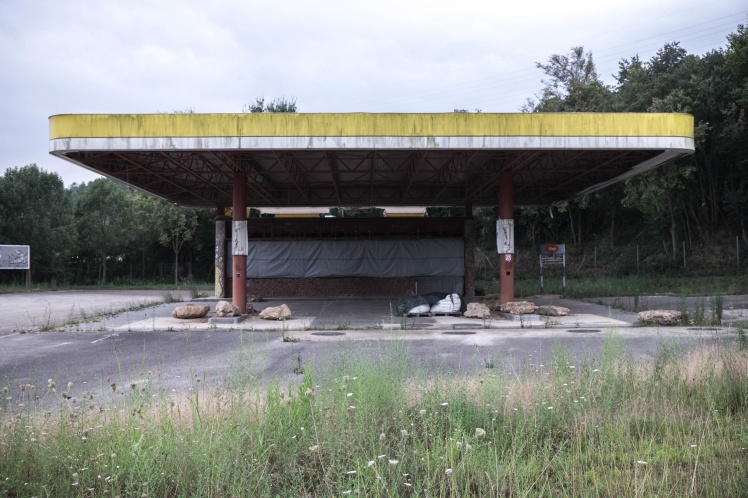 In some ways, it reminded me of the Mexican film Güeros, another singular saga about a young nondescript protagonist trailing after his older brother and getting hooked on a series of circumstances that move the plot forward while at the same time constantly, comically stalemating it. I loved Güeros, and remember discussing it positively with someone as a “road movie that isn’t really a road movie.”

Taking a detour for a moment, Publishers Weekly calls Zhadan’s female characters “stereotypical,” an assessment with which I agree to an extent but which I don’t think has as devastating an effect as might be assumed by someone who hasn’t read the book. The way in which Voroshilovgrad could be viewed as being least kind to women is in how the female characters are place-ified, serving as sexual landmarks or roadside attractions.

The male characters in the book, however, while not sexualized in the same way, don’t have a huge degree of depth, either. This assessment is not so devastating, either, as Voroshilovgrad isn’t a book that relies heavily on depth of what we might think of as “character,” period. Depth comes from a more collective but mysterious place. One of the most interesting things about the story, to me, was that I had the impression there wasn’t anything in Herman’s mind that was being hidden, and yet his motivations were still often a mystery.

Voroshilovgrad evokes the notion that the things we may consider nearest and dearest (romantic love, “brotherhood” and even more cynical values like materialism) are, rather than the be-all and end-all, just the tip of the iceberg emerging from the more alien depths of human motivation. While Zhadan paints a tense world in which violence seems apt to erupt at any moment, a picture probably in keeping with the majority of the English-speaking world’s perception of Ukraine, said violence erupts more seldom than we might expect.

The conflicts between various groups in Herman’s hometown (the “corn guys” and the “gas guys,” to name a couple) seem to have more complex (and at times, frivolous) motivations than cold hard cash, which again contributes to the feeling of a hovering alien power, reinforced by Zhadan’s frankly extraordinary descriptions of landscape and weather.

These descriptions are Zhadan’s greatest strength in this novel, and they summarily flatten any idea that Voroshilovgrad is nothing but a quirky, episodic mass of madcap rural hijinks. (I only mention this because I feared it from reading other reviews.)

With the disclaimer that I’m only working with the English translation here, it seems to me that the descriptions are more faithful linguistically than they are visually. The sun and air turn any number of improbable colors and shapes, and I’m fine with it, because it sounds or, perhaps more accurately, feels right.

In the same way, the pacts, truces and conflicts between the groups in the novel seem to be governed more by feeling than by anything so logical as, to name the worst case scenarios, greed and barbarism. From this atmosphere rises the strange idea that humanity might be inherently more decent than we, in today’s world, are led to believe, and furthermore that this decency might not be primarily rooted in love for one’s fellow humans or self-interest but something different (similar, maybe, but still different).

Near the end of the novel (these aren’t going to exactly be spoilers, but stop if you don’t want to know anything from the end), one of Herman’s sexual happenstances, a relatively unknown young woman, writes to tell him a story about something that happened to her when she was younger: She jumped in the river to save her dog, afraid the dog was drowning, then got caught up in the current herself and had to be saved by the dog.

She talks about love being like this. It might then seem that this notion of rescuer-rescuee love-confusion is something like the theme of the novel. However, the relationship this young woman has with her dog may be one of the most convincing examples of what we more commonly think of as “love” in Voroshilovgrad, and she ends the letter by remarking to Herman that she doesn’t know why she’s telling him this. There’s no particular evidence that she’s in love with Herman or he with her.

Upon first read, I found Voroshilovgrad wanting as a whole, but still a fertile playground for thought and an admirable excursion into unexplored territory.

As is the case when writing about any translated work set someplace in the world I’ve never seen, there’s always the chance that I’m missing something huge, some horribly significant piece of the puzzle that if levered into position would illuminate a whole world for me.

However, simply by the act of translating books and reading translations, we admit that there’s something to be gleaned from cross-linguistic and cross-cultural artistic communication. Maybe we even admit that there’s something to be gained by straining a work of fiction through the filter of our own experiences, a process that takes place to a lesser extent even in one’s native language.

At the end of Voroshilovgrad, we’re left with the humans in the story circling each other—held together by a magnetism that stretches beyond love, sex or money—in the strange forested corners of Ukraine and the universe.

Whether this impression of strangeness (which may have ultimately been what inspired the dream above, by passing back through the filter of my own life) was an effect of literary, cultural or personal translation, it’s made a dent in my consciousness.